Susan made her living entertaining in hotels, nightclubs, casinos and cruise ships for 25 plus years. She was always on the look for unique formal accessories to wear while performing. She found a wonderful pair of earrings in one of her favorite boutiques that appealed to her stage look. This design was apparently all the rage in the fifties and had resurfaced. She was often approached by women in the audience eager to know where they could buy them. She herself wanted more and more variety, since they were so comfortable, looked so great under the lights and got so many compliments.

Frustrated by the lack thereof, she taught herself how to make them and along with that discovery came the crafting/designing bug. She began experimenting with different gauges of wire, different mediums and techniques and incorporating today’s style within the artform.

In 1997, while performing aboard a cruise ship, she began developing the Zannedelion line and testing the different designs’ appeal by wearing them while performing. The response was overwhelming enough to motivate Susan to make the transition from entertainer to designer.

She designs for her best friends. Women with alot of spirit and spunk, a great sense of humor and not afraid to be noticed. Though her stage time is much less, she still has a great love for sparkle and gets as much joy out of seeing her work worn as she did wearing them herself.

Zannedelions – the name coined by her husband from her nickname “Zanny” and the growth of those creations all over the house – are a little wild, a little mischievous and alot of Susan and what she wishes for you – fun, cause it equals to happiness.

Fast forward to 2021!  Susan and her husband retired as a professional musicians in 2010.  After a couple of years, a crazy thing happened.   The love returned.   She realized that she was missing the true joy of playing and sharing music terribly.  She and her late husband, Jesse, an accomplished trombone player,  began “jamming” again just for the fun of it at the end of the day.  Playing great old jazz standards.   It plummeted her back to her twenties when she was first introduced to that music and was lost in the love for it.  That inspired revisiting their music again which progressed to forming a local community jazz band and giving free concerts for seven years in Joshua Tree, California.

Widowed now, she is coming to a full circle of life, searching for solace in her loss with the comfort of expression.  She now is performing those jazz standards with her own group “Le Jazzanne” featuring her vocals and saxophones.  She is revisiting original material she had composed forty years ago with the soul of life forty years later.  Another journey begins. 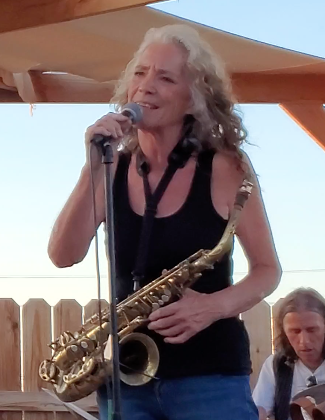 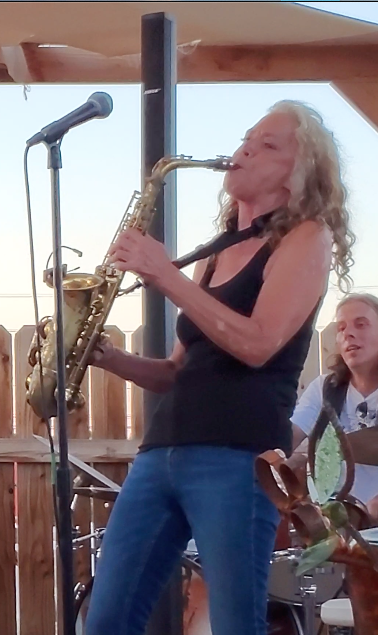 Ah…..the many paths of life and love.  Glass has always been her passion when it come to visual art.  Anything in glass and it’s a magnet to her.